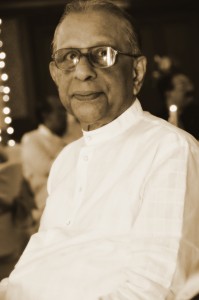 Appacha (aka Dr Samuel Krishnamurthy) is my Grandfather. He’s been a role model for me through most of my childhood. I’ve learnt a lot from him over the years. I would go sit with him in his hospital and try and observe as much as I can. He converted to Christianity in his 20s and moved to Kerala (after being shut out from his own household). He decided to settle down in Changanacherry, a small town. He did not even know Malayalam back then, but yet decided to practice medicine there. He faced a lot of hardships all through his life, including four different episodes of cancer. Below is a testimonial he wrote a few months back that I wanted to share with you all.

“Suffering is an unavoidable part of our lives. There is no exception. Even the only Son of God! How and in what way we face it and in that lies the fact â€“ How far we are dedicated to Godâ€™s way. We are all weak – weak in mind and body. And often we break down by the heavy burden of sufferings. Especially when they come in such a way as to crush us. Our response is usually one of the following: (i) â€œWhy such a suffering for me God, a follower of theeâ€. (ii) â€œTake away these sufferings from me, if not take my life away as I can no more bear thisâ€. (iii) â€œAll say Thou art a loving God â€“ Is this thy love? â€œ and we curse God. (iv) I leave all to God â€“ Do as you please. Only a weak human body and spirit can understand the depth and acuity of suffering. So God sent his son, in human form to live in every way like a weak human being like us. He did not fall in the trap of sin. But he had all other qualities and weaknesses of an ordinary man, lived as an ordinary man to show us an example of how in such a weak human frame one can conquer suffering and in what way one should face suffering. It is a universal fact that nobody â€“ none in human history suffered as much pain and shame and isolation like Jesus. He showed us how our faith should withstand pain â€“ to leave all in his hands, cure or no cure. To believe God is good in all his ways. In the book of Daniel Chapter 3, we are given an example of true faith. In it , three youngsters face the great emperor Nebuchadnezzar, who threatened them with death by fire if they did not pay homage to the image set up by him. â€œWho is that God that shall deliver you out of my handsâ€. He shouted challenging the true God that the youngsters believed. Their answer was the ideal answer for such a threat to their lives. â€œHe will deliver us out of thy hand O King. We will not serve thy Godâ€ We all pray to God when we face disastrous circumstances. That is the right thing to do as he is our only refuge. As the youngsters say â€œBut even if not, thou art my God , not depending upon the Good I received from thee, but whatever I received from thee.â€ Is our faith strong enough to say the same? Knowing fully well what was awaiting him the next day, Jesus prayed at Gethsemane (As human beings, we all would have prayed) â€œO my father, if it be possible, let this cup pass from me. Nevertheless not as I will, but as thou will.â€ He set an example for us â€“ A living example that explains the true significance of â€œLet thy will be doneâ€ Whatever it be, where do we stand on our faith? Only in shouting praises when the wind blows favorably and groan and complain when all goes wrong? Show we not reach the stage of â€œBut even if not, thou art my Godâ€ as declared by the youngsters facing sure death by being burnt alive or as our Saviour facing the cross declared â€œNevertheless not as I will but as Thou wills.â€ Real faith is complete surrender.

I am a cancer survivor and was attacked with the disease thrice. During the three instances, I was swinging between life and death on numerous occasions. To the great surprise of medical specialists, I was completely cured. During the first episode, the original tumor was at the prostate and there were secondary attack in my bones â€“ medically a hopeless case. The main tumor completely disappeared and the secondary lesions were not to be detected at all. How indescribable! The second attack was on the tongue. I could not eat, drink or speak, and above all, the bad odour would make it difficult even for dear ones to come near me. I am today normal â€“ speaking, drinking, and eating normally. How? The third time was the worst. There was a big red tumor, the size of a tomato detected at the end part of the large intestine, leading to continuous bleeding. More than one foot was cut off, and this time also my life was hanging in balance. Once again I was completely healed. How?

In all these instances, I never lost my faith in Jesus. My loving Lord whose presence I felt all through the ordeal. The specialists surgeons who treated in all these instances had one question to ask me â€“ â€œHow can you be so normal, happy and behaving as though nothing has happened?â€ My answer was this â€“ â€œIf only you know the ONE whom I know, then you would not have asked this questionâ€ God has raised me from nothing. From the day I was driven out of my home and given a peaceful Godly home to live happily, he has promised me his constant presence and a better, much better heavenly home. Then why should I be sad or worried? My only prayer was this â€“ â€œLet thy will be done.â€

Yes, let our faith be so firm, so as to conquer all earthly conditions â€“ happiness or sorrow with the one and only great prayer of our Lord.
LET THY WILL BE DONE
WE CAN CONQUER THE WORLD
AND ALL THE SUFFERING THEREIN
PRAISE THE LORD!”