Why the X1 Prototype Mouse from Citrix makes perfect sense! 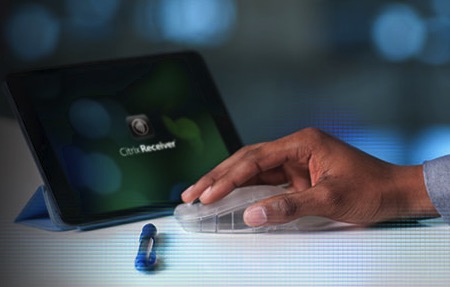 At Summit 2015, Mark Templeton announced the prototype of a mouse named code named “X1”. The mouse is specifically designed for the iOS platform. As many of you probably know, Apple does not support pairing a bluetooth mouse with iOS devices. The X1 mouse bypasses this limitation by allowing users to pair the mouse with the Citrix Receiver app thereby enabling them to use the device with published applications, VDI and Hosted Shared Desktops.

If you look at the enterprise landscape, iOS still dominates the mobile market. While it has always been possible to access Windows applications and desktops via Citrix Receiver, its debatable whether the users are actually productive. With the mobility pack, desktops can be re-skinned to suit the form factor, but it was still not quite where it needed to be in terms of productivity. Not to mention, most native windows applications that have not been customized for the mobile form factor were generally not very usable other than viewing data. Thanks to these limitations, most of us generally had to carry a laptop in addition to our mobile device to get real work done.

The X1 mouse has fundamentally solved these problems. Users can now be fully productive on iOS devices  as they can not only view data, but can also quite easily edit and manipulate data. windows applications and desktops (both VDI and hosted shared) are a lot more usable and functional.  Walking around with just a tablet is now a reality. I really believe that the X1 mouse will encourage mobility and help move forward Citrix’s vision of a Software Defined Workspace!

This ransomware is most evil I’ve seen so far

This is something I started working on a while back with a friend of mine but never completed. I think it's time to revisit.

The Most Helpful Google Search Modifiers Everyone Should Be Using https://lifehacker.com/the-most-helpful-google-search-modifiers-everyone-shoul-1847641619?utm_medium=sharefromsite&utm_source=_twitter

Celebrate National Online Learning Day tomorrow with #myCUGC and @mobileruiz for a live virtual session on @citrix #DaaS – what it is and how it can help you! CTP @CloudSparkle will lead the live Q&A discussion. REGISTER NOW: https://bit.ly/3yXHhts

One of the clearest barometers of curiosity is how often you share ideas and insights with others.

A hallmark of discovery is bursting with excitement to tell people what you've found.

Frequent enthusiasm about communicating knowledge is a sign of intellectual engagement.