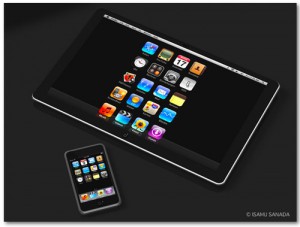 As most other geeks out there, I was eagerly awaiting Steve Job’s announcement yesterday about the iPad. My buddy Adam and I were “Working” and following the live blog feed on engadget. As a person who started off his career being a Microsoft cool aid drinker, but then converted to a Mac user, I feel I am in a position to give an unbiased review of the phenomenon that is the iPad as I havent sold my soul to Steve Jobs (yet). So here goes!

1. The Name – First off, the name iPad leaves a sour taste in my mouth. I would have been much happier with iSlate or iTablet or heck iTab. iPad brings some gross thoughts in my head, especially after my buddy Jay showed me this.

2. Design – Steve Jobs said it best – “Technology meets Liberal Arts”. And just like the Mac, the iPod and the iPhone, the iPad is a beauty in terms of design. I wont go into the details, but it is a sight to behold. I also feel the form factor makes it a great eReader and potentially THE Kindle Killer. The one regret I have though is the lack of a keyboard. A tilt slideout keyboard would have been nice and made it more useful. Granted there is a dock and a keyboard that you can buy (if you are willing to shell out one trillion dollars), but its not quite the same. One of my biggest regrets about the iPhone is the same. I hate to chat/sms or send emails using the iPhone and unfortunately I think the same will be true about the iPad.

3. The User Interface – I think the UI is just a blown up iPod touch on steroids. I love the iPhone/iPod touch OS and hence feel that Apple got it right trying to use the same design for the iPad. Since the infrastructure already exists in the form of the app store with the countless developers hoping to make a buck, I think this was the right move. During his presentation, Steve Jobs showed how a bunch of developers have recoded some of the iPhone apps/games for the iPad and boy was that sweet! Shows the tremendous potential. If you thought 3 billion app downloads was a lot, wait till this puppy is out!

4. Connectivity – The iPad comes with WiFi (802.11 a/b/g/n) connectivity and Bluetooth 2.1. In addition there is the OPTIONAL (yes u heard right … OPTIONAL) 3g connection. Personally, I am very happy that they made 3g optional as it brought down the price of the non 3g iPad to a price I would be willing to pay. Having said that, $130 bucks for 3g connectivity which I bet is some small chip that cost some manufacturer in South East Asia a buck to make seems a little stiff! Not to mention the 30 bucks you have to pay AT&T for unlimited broadband. So in short, am I willing to pay 30 bucks for my iPhone and another 30 bucks for my iPad and the additional $130 for the 3g version of the device?? A BIG NO! Seems stupid to me that someone with an iPhone will actually do it. But the American people might prove me wrong 🙂

5. Storage – This is an area that I (along with almost all my geeky buddies) am disappointed. The iPad comes with a 16GB ($499 – non 3g), 32GB ($599 – non 3g) or 64GB flash drive ($699 – non 3g). There is NO REMOVABLE STORAGE!!!!! Why Apple Why??? This is something I did not like about the iPhone and they have disappointed yet again! Because of the lack of removal storage, I would say that if you plan to buy one, it would be a wise move to get the model with the maximum storage you can afford!

6. Battery Time – The iPad comes with an inbuilt 25 Whr rechargeable lithium polymer battery that based on what Steve Jobs claims holds up to 10 hrs of battery time when in use and about a month of standby. That is pretty phenomenal if you ask me. But like most claims about battery life, I will believe it when I see it! Even if it lives up to 80% of the claim, I would say its pretty darn good.

7. Audio/Video Formats – The iPad supports most of the common formats (MP3, AAC,MP3 VBR, Apple lossless, AIFF, WAV, mp4, m4v, mov etc) and I am particularly happy that it supports MP4 AND M4V. I own a few Apple TVs and my entire movie collection is encoded in M4V. Now I can just create a playlist and drag and drop the movies I want on my IPad (please note how I’ve already assumed that I’m getting one.. wifey are you listening???) to a playlist and just sync. No need to worry about re encoding (as is the case with the iPhone).

8. Display and Performance – We have to wait and see here, but I am sure the iPad wont disappoint in terms of Display. As far as performance goes Apple is introducing their own custom designed 1ghz A4 processor. I don’t know if its just me, but I am sure the processor will rock. Look at everything Apple has made to date. However I am a bit disappointed that applications cant still run in the background just like the iPhone. I hope they fix this soon. I would like to listen to music and maybe play a game or browse the net. I cant do that right now in the coming version from what I understood.

With all that said, am I getting one??? HELL YEAH! Can I live without it? Probably.. If I had to choose between the iPhone and iPad what would I choose? The iPhone without a doubt. Which one do I think is a more revolutionary device? Once again the iPhone without a doubt! I dont see the iPad as a replacement to my netbook/laptop or the iPhone, but more as a entertainment device that I will use in conjunction with my other toys. I will probably use it when I travel as an entertainment source to watch movies, play games etc. I hope my insights were of use to those who read this blog. Do post your feedback. I would love to hear from you all!

This ransomware is most evil I’ve seen so far

This is something I started working on a while back with a friend of mine but never completed. I think it's time to revisit.

The Most Helpful Google Search Modifiers Everyone Should Be Using https://lifehacker.com/the-most-helpful-google-search-modifiers-everyone-shoul-1847641619?utm_medium=sharefromsite&utm_source=_twitter

Celebrate National Online Learning Day tomorrow with #myCUGC and @mobileruiz for a live virtual session on @citrix #DaaS – what it is and how it can help you! CTP @CloudSparkle will lead the live Q&A discussion. REGISTER NOW: https://bit.ly/3yXHhts

One of the clearest barometers of curiosity is how often you share ideas and insights with others.

A hallmark of discovery is bursting with excitement to tell people what you've found.

Frequent enthusiasm about communicating knowledge is a sign of intellectual engagement.